Remember my all time favorite bread recipe? If you haven’t tried it yet, give it a go. If you have a stand mixer, it’s only about 15 minutes of hands-on time.

Because this recipe makes two loaves and I only have one bread pan (I like to pretend I’m a minimalist), I usually freeze half of the dough after the first rise. Just pop it in a gallon freezer bag and freeze it until you’re ready to use it. I’ve found that the yeast is happiest if you freeze it for no more than a week or two, but I’ve also forgotten about it and baked it after almost two months and it still made good bread (the cranky yeast made it more of an English muffin texture inside, but it made excellent toast).

In a previous post, I shared a recipe for some awesome caramel cinnamon rolls using the other half of your bread dough, and today I’m going to share with you my recipe for a seriously delicious alternative – sweet almond bread.

It starts with the dough. Either make it at the same time as your sandwich bread, or use your frozen dough. It’s best to thaw the dough in the fridge overnight, but you can also set it out on the counter and it’s usually ready to bake in the afternoon.

This recipe uses the thinly sliced almonds as opposed to slivered almonds, because the lighter slices allow the bread to rise higher. I also like to use raw sugar in this recipe because it has a higher molasses content than regular white sugar, which means it has an actual flavor rather than just being sweet. It also has much larger grains than brown sugar, so it’ll stay in place and won’t melt into a big puddle in the bottom of your bread pan.

1/2 of the dough from sandwich bread recipe

Thaw dough overnight in the fridge if it has been frozen. Flour your counter top and rolling pin to prevent sticking. Roll into a rough rectangle/oval around 1/4″ thick and about as wide as your bread pan.

Sprinkle evenly with your sugar and almonds. Press it into the dough a bit to stop it from moving around during the next step. 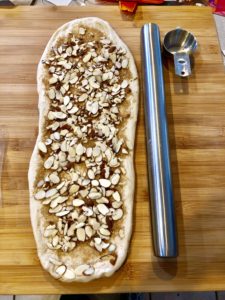 Roll it up. If the dough is stuck to your counter, use a spatula or bench scraper to stop it from tearing. When it’s all rolled up, pinch the edges and ends shut to stop it from leaking and making a sugary mess. Seriously. Pinch it like you’re mad at it. (The following picture is before I pinched it) 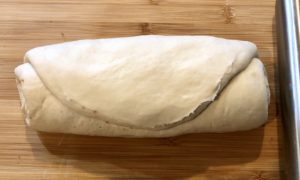 Put it in a greased 9″ x 5″ bread tin, and let it rise until it’s risen about an inch over the top of the pan. This typically takes about an hour if your dough is room temperature, but may take 2-3 hours if your dough is very cold.

Preheat the oven to 375 and bake for 30-40 minutes, or until the crust is golden brown and the base sounds hollow when you tip it out of the pan and tap on it. Let it cool on a wire rack before cutting into it. Eat it with what some people *cough* Aaron *cough* might call too much butter. 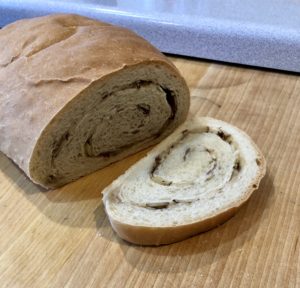 Easy peasy, and oh so good.