So I know that I’m always trying new and “weird” things, but I recently stepped out of my comfort zone and did something actually new! I saw an old wooden quilt stand on Facebook marketplace, and thought it looked just like a tiny clothes rack. Thought I’d have a go at refinishing it to hang up all of Madeline’s princess costumes. It was originally varnished, and then it was painted with a too-thin layer of super shiny white, and then it was partially painted again in a thick layer of matte baby blue. It wasn’t super ugly or anything, but the paint was pretty beat up and I knew we could do better. Also, someone had used white school glue to attach some weird rhinestones near the top, and they were all falling off and leaving glue splotches behind. I didn’t think to take a picture until I had half of the thing stripped. 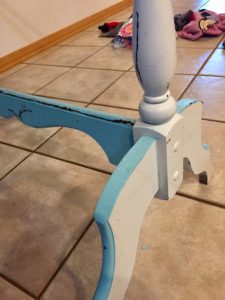 I let Madeline pick the colors, because I figured that was the best way to make it awesome. She decided on blue with (as she put it) “mermaid sparkle” accents. It’s definitely HER. Can you tell she’s excited? 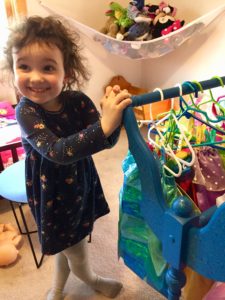 I’m cheap (and apparently I don’t value my time very highly), so rather than going out to buy a chemical paint stripper I just used a putty knife to scrape it off. Worked pretty well except for the shiny white stuff, because the paint layer was too thin to chip it off cleanly. Once I got all the rhinestones, glue and paint off (minus the white stuff – not worth the effort), I sanded the whole thing down to smooth it out and remove any residual paint. I’ve heard it’s not really necessary when using the paint I decided to go with, but I figured I’d rather be safe than sorry. I’d hate to finish up the whole thing and have paint start chipping off in a year. Plus, I need maximum paint stickage to stop this little gopher from chewing it off too easily. She’s an animal. “I’m not chewin’ it, Mom. I’m not!” To be fair, her teeth were touching it, but she wasn’t moving her mouth. Technically she’s right, and she’s all about being technically right. 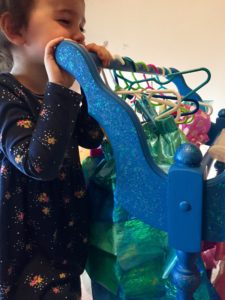 I used chalk paint (readily available in a variety of colors at most craft stores), which worked out really well. Decided to go with two layers to minimize the appearance of brush strokes and to make sure I got an even coat of paint and didn’t miss anything. Madeline helped by painting with pretend paint (“Don’t worry, Mom. We’ll do this together.”). She took her job very seriously. After the whole thing was painted blue, we added the “mermaid sparkles” and then covered the whole thing in two layers of a clear top coat. Check out that sparkle! 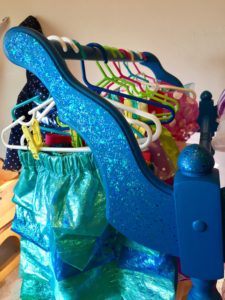 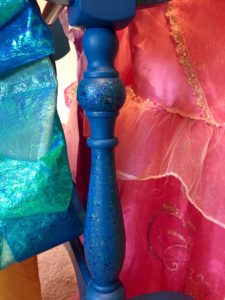 She was (and is) very proud of the final product. And so am I! It kind of has me wondering if there are other random things I can re-purpose and/or refinish. It was actually pretty fun. 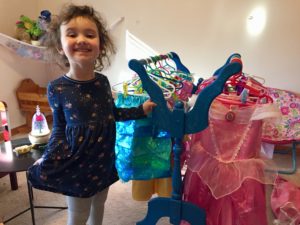 So there you have it. I tried something new, and it worked! So if you ever find some weird piece of “why does that even exist” furniture, take a look at it and see if you can make it into something useful (and sparkly). 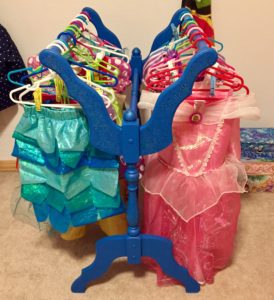 2 Replies to “Adventures in re-purposing”